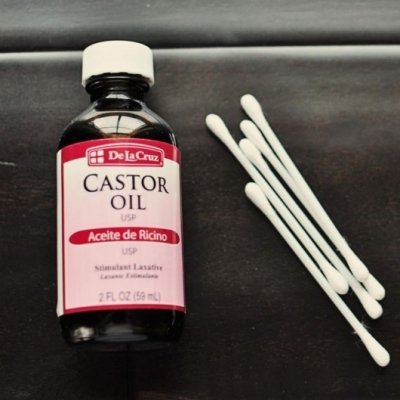 After my mother told me how my grandmother used to dose her and her siblings up with castor oil for practically any ailment I thought I’d look at other ways to use castor oil. First off let me just confirm that castor oil is a not a cooking oil and should not be used for culinary purposes although it is used by the food processing industry. And now onto some of the uses of castor oil around the home:

Castor oil is a rich source of vitamin-E. It may taste awful, but it can be an amazing remedy for ragged cuticles and brittle nails. Thankfully, you don't need to swallow it – just take some castor oil and massage it slowly on your cuticles and nail. In a couple of months, you will have healthy nails with supple cuticles.

Your eyes are feeling tired after all day at your computer. Did you know you can use odorless castor oil on your eyelashes and around your eyes to make them look fresh. It also helps prevent wrinkles and dark circles. Avoid getting it in your eyes though.

If you don’t like to use petroleum jelly you can use castor oil to lubricate your kitchen scissors.

Moles hate castor oil. Using castor oil can be the best defensive weapon for you to keep moles from tearing up your garden or yard. Simply drench a molehill with a solution containing 2 gallons of water and ½ cup of castor oil. You're not killing the creature, but you're doing enough to make it look for another lawn to spoil.

5. Bring Ferns Back to Life

One of many interesting uses for castor oil is that it works amazingly well to perk up your sickly ferns. You need to mix 1-tablespoon baby shampoo and 1-tablespoon castor oil in four cups lukewarm water to prepare a solution. Only 1 tablespoon of this tonic every day should brighten up your ferns once again.

Have you been finding it a wild goose chase to discover a product that would bring back the shine in your hair? Well, the solution is right there in your bottle of castor oil. You need to make a mixture by adding 1-teaspoon glycerin, 2 teaspoons castor oil, and one egg white together. Massage it into the scalp and leave it there for a few minutes before you wash it out.

Make your achy joints pain-free by massaging in castor oil regularly. Castor oil becomes a great remedy for arthritis when mixed with cayenne or turmeric powder. Gently rub this paste into your joint to feel great again.

8. Have a Healthy Liver

Swallowing castor oil may not be the most delicious thing to do, but it is extremely beneficial for the liver and gall bladder. It works amazingly well to promote the removal of toxins from your liver. It also helps get rid of stale bile and works great to dissolve gallstones.

You can alleviate the pain and swelling caused by corns simply by massaging castor oil on the affected area. It is an equally good remedy for calluses. It may take a few days before the effects kick in, but it works for sure.

Using castor oil is definitely a way to have shinier hair, but it can also make hair grow quickly. Whether you want thicker hair or you want a solution for balding areas on your scalp, simply massage castor oil for 5-6 minutes daily to resolve the issue. Those who want thicker eyebrows may want to try castor oil for best effects.

One of the uses for castor oil is that it works as an effective disinfectant/antiseptic. Not only can you use it to treat minor cuts and wounds, you can also rely on castor oil to treat ringworm or fungal infections.

Have you got a bottle of castor oil in your cupboard? No? Why not?